Young Love: Talking to Your Tween About Dating and Romance

Help your tween navigate those tricky matters of the heart.
By Sarah Mahoney 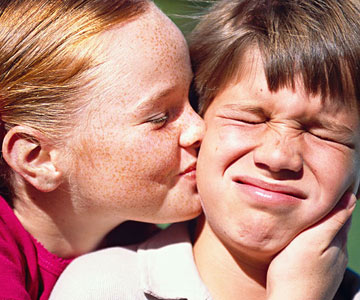 My daughter was 11 when she went to her first school dance. I put on a brave face as she got out of the car in her polka-dot dress (with a denim jacket for her signature swagger). "Have fun," I said, trying to sound airy.

But what I really wanted to say as she disappeared into the crowd of sixth-grade bravado was, "Wait—come back!" She still seemed too young for a middle-school mixer and the awkwardness that accompanied it. I thought about my first dance: standing alone in a corner, not moving, desperately waiting for him to notice me. How did I get from there to dropping off my own daughter at the doorstep of romance? And was there a way to make those girl-meets-boy dramas any less heart crushing?

Experts say parents can't do much to protect kids from the bumps and bruises of first crushes beyond keeping the lines of communication open and offering comfort. That's no simple task—kids seem to leapfrog from sweet curiosity about the opposite gender to demanding to know when they're allowed to date to holding hands, kissing and more.

"Between the ages of 10 and 13, kids start having crushes and thinking about sexuality and romance, however they envision it," says Marilyn Benoit, M.D., a child and adolescent psychiatrist in Villanova, Pennsylvania. "Biologically, it's what their bodies are telling them to do—they're in the early stages of puberty. And socially, it's when they learn to negotiate relationships." But there's some good news for mom and dad: Tweens still want to talk to their parents. They value their opinions and rely on them for advice. That's why it's so important to use these years to get closer to your kids while laying the groundwork for healthy relationships during adolescence and beyond, says Benoit. These key tips will keep everyone on the same page.

Many parents assume their tween has no interest in the opposite sex because he or she hasn't said anything about it. They may even know that kids the same age "date," but are convinced that doesn't include their son or daughter. In fact, two-thirds of parents believe they know "a lot" about tweens' relationships, but only 51% of tweens agree—while 20% say mom and dad don't know a thing.

One reason for the disconnect is that parents think of dates as actual physical events—going to the movies, for example, or a dance. Tweens, at least in this century, don't. They socialize online in a way that is invisible to adults, says Jenna Saul, M.D., a child and adolescent psychiatrist in Marshfield, Wisconsin. "So you have parents thinking their daughter has never dated while according to her, she's on her third boyfriend," she says. "It seems silly to parents but is very real to kids."

To bridge the gap, Saul suggests listening to your kids' conversations when they're on the phone, or when there's a group of them in the car. "Look for openings," she says. "Try saying, 'I heard you and your friends talking about crushes. Is there someone you like? What do you like about him?'" Try the same tactic with online activity: Find out whom she chats with and how that person makes her feel. (Yes, you can also check the chat logs. But the point is to get regular conversations going.)

2. Give them real answers, and not just about sex.

As soon as the topic of a possible boyfriend or girlfriend arises, many parents wonder what to discuss. While it's normal to want to protect your kids, experts suggest slowing down before charging into the condom lecture. "What your tween really wants to talk about are feelings—the way her heart beats faster when she thinks about seeing the boy at band practice, or how good it feels when he says hi," says Benoit.

Immediately steering the conversation toward sex ed does kids a real disservice, says Elizabeth Miller, M.D., an associate professor of pediatrics at the University of Pittsburgh School of Medicine. Parents can unintentionally oversexualize the situation while undercutting healthy feelings. "Tweens aren't usually that interested in sex itself," says Miller. Their questions are generally more innocent. They want to know how to approach someone they think is cute, not talk about STDs. Most likely, they're not even thinking about sex at all—but may get freaked out because you are." Let them guide the conversation, and listen carefully to what is really being asked.

If your child shares her feelings, be careful not to trivialize them. To a 13-year-old, a new rival for her crush's attention can be the worst thing ever. "Young love feels serious," says Lynn Ponton, M.D., a child and adolescent psychiatrist in San Francisco. "Kids want someone to hear them out and help them make sense of what they're experiencing—not to tell them it'll be over by tomorrow."

For many adults who grew up with heat doodles and do-you-like-me-check-yes-or-no notes in middle school, watching their kids hook up and break up via Facebook, Twitter and text feels not only alien but scary, because it's often unsupervised. Try to institute ground rules about "romantic" interaction early on, even before there's any curiosity. This reassures your child that it's okay to be interested in getting to know someone better. Spelling out the parameters in advance also lessens the possibility of conflict later on. "Of course, the message may be different for each family based on their culture and dynamic," says Fran Harding, director of the Substance Abuse and Mental Health Services center, which tracks teen behavior. "The important thing is that the policies be very clear, consistent and enforced." Kids should know exactly where parents stand when it comes to their digital lives, as well as actual dating. "And they should be aware of the consequences," says Harding, "if they don't follow the established family rules."

First, let your kids know you'll be checking their social media pages and browser history from time to time. It's true that much of tween romance seems to unfold over chat, says Jessica Gottlieb of Los Angeles, whose 14-year-old daughter appears to have been bitten by the love bug overnight. "But it's actually a good thing," says Jessica, "because every few days I read her chat logs and see her conversations are mercifully innocent and appropriate."

This kind of monitoring also applies to texts. Parents may detect a problematic relationship if someone seems too controlling, constantly demanding to know a kid's whereabouts. In fact, technology may tip you off that your tween is in a relationship in the first place. While text content—"Wassup? LOL!"—won't tell you much, volume will: Lots of texts could mean he or she matters. On Facebook, see who comments most often on your kid's posts, and be sure to check his Relationship Status. (In tween parlance, a Facebook-official couple is practically engaged.)

Then sit back and relax. You survived tween romance—and your kids will too. 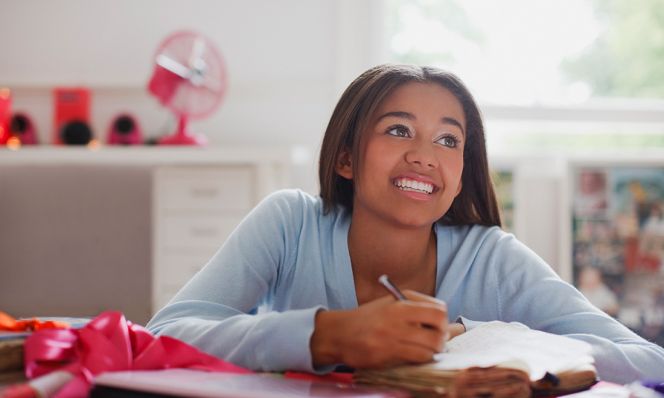